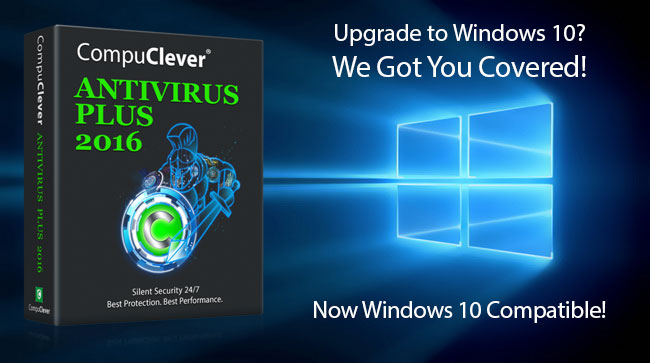 If you are upgrading to Windows 10, please be aware that Microsoft said: “If your anti-malware subscription is not current (expired), Windows will uninstall your application and enable Windows Defender”. We have expressed our concerns about Windows Defender stating that it is not the best antivirus protection you can get, free or paid, even according to PC Magazine.  We recommend anyone upgrading to Windows 10 should check what antivirus protection is running after making the switch.

>> How to tell if your antivirus provides you enough protection

With CompuClever Antivirus PLUS, you can protect a PC with the best antivirus technology trusted by over 500 million users around the world. Still not convinced? No worries, take a FREE 7-day trial for a spin and we guarantee that you will see the difference between your current antivirus program and CompuClever Antivirus PLUS 2016, which offers total security protection with no compromise of PC speed.

Give you and your family the best PC security protection available!