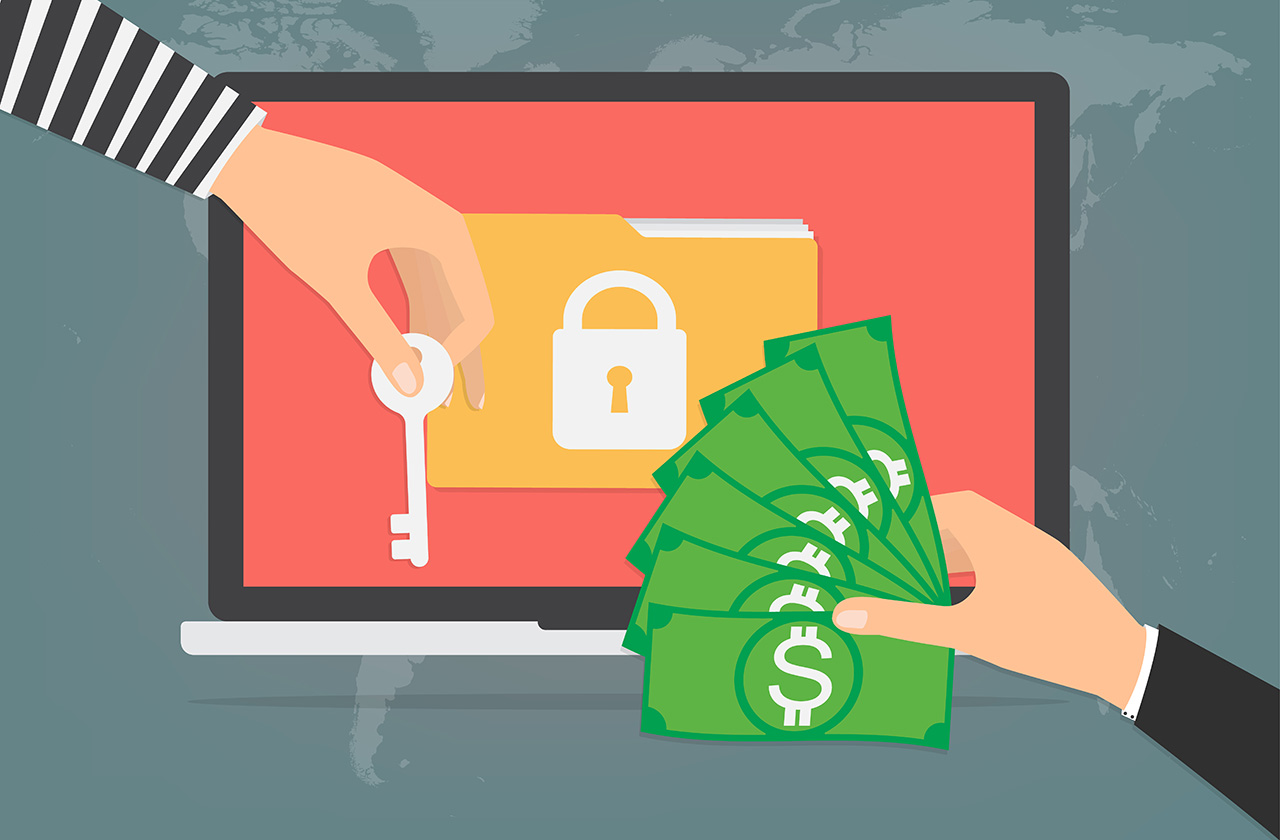 Note: There are older versions of ransomware that display false messages such as claiming you have performed an illegal activity with your PC. They then state you are being fined by a police force or government agency. We want to stress that these claims are false and can be considered a scare tactic designed to extort money from you.

What is the result of the attack?

While there are various forms of ransomware, all of them prevent you from performing normal PC functions. This includes:

What about the ransom?

Some ransomware attacks involve the victim having to pay money while some make you complete a survey. Payment of money is performed online and sometimes involves the victim having to pay in Internet currency Bitcoins. Due to the nature of those that commit these cybercrimes – there is no guarantee that your data or PC will return to the pre-attack state.

How much do they extort?

Symantec gained access to a malware server in 2012. This provided them first hand insight of the ransoms that were paid out. In a single day 5,700 computers were infected and 2.9% paid the ransom. This comes out to approximately $33,600 for one day.

“Given the number of different gangs operating ransomware scams, a conservative estimate is that over $5 million dollars a year is being extorted from victims. The real number is, however, likely much higher.”[1]

Many users around the world were victims of the malicious “WannaCrypt” software attack which has been considered one of the worst and most widespread cyber-attacks. More than 230,000 computers in over 150 countries were affected. All files on infected PCs were locked and the demanded ransom was 300 dollars in bitcoins.

Interestingly, people running Windows 10 were not targeted by the attack. Despite this, this attack was serious as evidenced in the steps Microsoft took. They took a highly unusual step in providing a security update for all customers to protect even the Windows platforms that are in custom support only. This includes Windows XP, Windows 8, and Windows Server 2003.

Supported versions of the operating system (Vista, Windows 7, 8.1, 10, etc.), have access to the security update MS17-010. If users have automatic updates enabled or have installed the update, they are protected. Microsoft states[2]: “For those organizations who have not yet applied the security update, we suggest you immediately deploy Microsoft Security Bulletin MS17-010“. They go on to state that this attack may evolve over time and additional defense strategies are warranted.

Companies across Europe and the US were affected by the ‘Petya’ ransomware attacks. Infected computers displayed a message demanding a Bitcoin ransom of $300. Victims were unable to unlock their computers even if they paid the ransom.[3] The instructions included sending confirmation of payment to an email address. However, that email address was shut down by the email provider and there was no way to contact the attacker for a decryption key to unlock their computer.

This ransomware attack exploited the same Microsoft exploit as WannaCry – the vulnerability known as EternalBlue. Even with the patch, this cyber-attack has two other ways to spread within an organization focusing on the network administrator’s tools. Experts believe the initial infection is suspected to have been delivered through email (as with WannaCry).

If Infected With Ransomware:

You are a victim of a ransomware infection once you see some form of ransom demand appearing in a dialog window, an app, or a full-screen message. Unfortunately, this demand is displayed after encrypting your files or disabling some part of your PC.

Before you try to recover your files, Microsoft suggests trying to fully clean your PC with Windows Defender Offline. After this you can try to Backup and Restore in Windows.

We fully agree with Microsoft: “Do not pay any money to recover your files. Even if you were to pay the ransom, there is no guarantee that you will regain access to your PC or files.”

If You Already Paid:

If you paid the ransom, contact your bank and local authorities immediately. Your bank may be able to block the transaction and return your funds if you paid with a credit card. Inform your bank if you did submit credit card details to the cyber thieves.

We suggest you also contact the following government agencies that deal with fraud and scam reporting:

There are safe measures you can take to lessen the impact of attacks and failures and there are ways to prevent malicious attacks from crippling your PC and network.

Hundreds of millions of emails that include a ransomware attachment are being sent out every month. Many of these are being blocked and software vendors are working hard to shrink security holes and fix this ongoing cyber-crime.

As can be seen with the information provided here, staying informed, taking precautions, and using safe practices can help prevent you from getting an infection that could save you time and your data. If you require further information on this subject we recommend Microsoft’s Ransomware FAQ page.